3 Growing Up in Australia, Joining the Sydney Symphony Orchestra as Principal Oboe

Music by a composer who was very specially close to Sir Charles Mackerras’ heart – Leos (pronounced Layosh) Janacek — he was conducting the opening movement of Janacek’s Sinfonietta there, with the Czech Philharmonic Orchestra. Sir Charles virtually singlehandedly made Janacek famous and popular outside Czechoslovakia through his passionate championship of his music, as we’ll be hearing later on in this program —– and we’ll also be hearing later how he revolutionised the Sadlers Wells Opera Company in the 1970s, how before that he was one of the earliest pioneers of period instrument performance, and how he became acclaimed around the world as a prodigiously gifted interpreter of a huge range of orchestral and operatic music. On several occasions over a period of nearly 20 years Sir Charles spoke with our producer Jon Tolansky about highlights of his life and some of the most vital areas of his repertoire, and we are very grateful to the Music Preserved archive of live performances at www.musicpreserved.org for providing us with our first few clips of him describing his earliest years at home in Australia – where he had arrived from America with his parents, nearly two years after he had been born, which had been in 1925.

Well yes, but Sir Charles did not mention that he was exceptionally talented. He was playing the oboe in the Sidney Symphony Orchestra when he was just 15 years old and became the Principal Oboe while he was still in his teens – and – as his sister Joan remembers, he had another precocious gift.

And clearly the pupil realised that. He told his mother that Father Muset – his teacher – was “oily” and he said that the priest’s Hymn to the Virgin “sounded as though he had composed it while having illegal contemplations on parts of the Holy Virgin’s anatomy” (!!!). Meanwhile, he was already writing musical arrangements for some local radio stations and theatres, and he was starting to take an interest in conducting – most particularly after he had the opportunity to play with one famously distinguished conductor when he visited the Sydney Symphony Orchestra as a special guest in 1944. 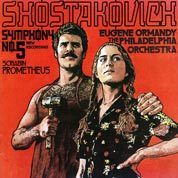 A clip of Eugene Ormandy conducting Shostakovich’s 5th Symphony there – with the Philadelphia Orchestra.